Recently, USDA-FSIS released performance standards for Campylobacter and Salmonella requiring producers to limit the presence of these bacteria on raw poultry products1. One of the best ways to meet the Campylobacter standards is to raise flocks free of this organism. However, there are a number of reasons why it is difficult to produce Campylobacter-free birds. Campylobacter can be naturally found in the intestinal tract of birds and is easily spread via fecal contamination. As birds move around a poultry house, they may sample other birds’ droppings. Thus ingesting Campylobacter and becoming carriers. Usually, once one bird becomes colonized with Campylobacter it does not take very long for the rest of the flock to become colonized as well. The litter, feces, communal water and insects (e.g. flies) in a poultry house are all possible routes of transfer among the birds.

Growers use a number of strategies to keep the birds free of Campylobacter and other human pathogens, as well as microbes that could make the birds sick. Rodents are known carriers of Campylobacter so growers keep the areas around the poultry houses free of tall grass and debris.  Doing so eliminates areas where rodents can hide or build nests. Growers have additional pest control measures in place within the poultry houses.   Additionally, flies and other insects can also carry Campylobacter as well as other undesirable microbes so fly bait, insecticides, and litter treatments are used to limit their populations. Growers also wear overalls and plastic overboots so they do not track Campylobacter into the houses from the outside.

As previously mentioned, communal water and litter may play a role in spreading Campylobacter through a flock. To prevent this, the water is generally sanitized via chlorination or acidification to reduce Campylobacter or other pathogens. Campylobacter is known to be a rather fragile organism that does not tolerate oxygen or dry conditions well. Growers till the litter in the poultry houses, which helps to both oxygenate and dry out the litter making it less hospitable to Campylobacter.

At slaughter, there are a number of steps to prevent Campylobacter from being present on the raw, finished product. Externalizing the internal organs for FSIS inspection can result in microbes from the intestine contaminating the carcass. Removal of the intestines can also result in feces (and the bacteria in the feces) to leak onto the carcass.  Any intestinal microbes, including Campylobacter can contaminate the carcass at this point.  Because bacteria are invisible to the naked eye, all birds are potentially contaminated with Campylobacter and from this point on go through a number of decontamination procedures.  To ensure the safety of the product, the carcasses get washed and may be sprayed with organic acids or other compounds that have antimicrobial action. Next, the carcasses are chilled quickly either in ice water or cold air to prevent remaining bacteria from growing and increasing in number.  Chlorine may be added to the chill water to reduce microbial levels,   including Campylobacter.  After this step, the birds are sealed in packages and are shipped to retail.

Even though the government and food industries work together to provide safe food, poultry is still one of the more common vehicles of foodborne illness2. This makes the correct handling of raw poultry a critical step in preventing foodborne illness. You can visit check out the USDA’s tips on preventing cross contamination. By using correct thawing procedures, keeping raw poultry separate from ready-to-eat foods, and washing hands we all  can help decrease the chances of becoming ill. 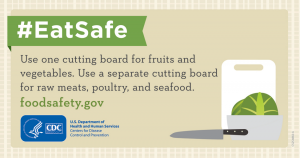