C. jejuni doesn’t show up so much in the headlines due to the self-limiting nature of infection. In developed countries like the United States, incidences of campylobacteriosis are more of an economic burden than a medical liability. Campylobacter is commonly found in the gastrointestinal tract of birds, cattle and the agricultural environment, acting as reservoirs of infection. Although Campylobacter is a fastidious organism with stringent growth requirements such as decreased tolerance to atmospheric oxygen, their ability to survive and thrive in the environment gives rise to the ‘Campylobacter conundrum’ which the poultry industry is trying to tackle. There are several ways by which Campylobacter infection can be controlled. Firstly at the farm level, by preventing the colonization of Campylobacter in poultry through the implementation of strict biosecurity measures. Secondly, by decreasing the bacterial load during handing of chicken in the abattoir and the production facility. To plan effective intervention strategies for Campylobacter control, a better understanding of Campylobacter survival under nutrient poor conditions outside the poultry gastrointestinal tract is crucial.

Biofilm is a community of single or multiple species of bacteria, held together in a slimy complex sugar matrix attached to a surface. Bacterial biofilms are extremely resistant to antimicrobials and disinfectants thus offering a continuous source of infection. Recent studies have shown that C. jejuni were able to persist in poultry slaughterhouses and food manufacturing units. Campylobacter gets attached to surfaces such as the chicken skin and plastic surfaces acting as a source of persistent contamination, thus resisting routine cleaning procedures. The formation of biofilms by Campylobacter has been identified to play a role in its ability to withstand environmental stresses, such as heating, chilling and exposure to chemicals, commonly followed during carcass cleaning. Campylobacter jejuni can form biofilms on abiotic surfaces and is also capable of colonizing pre-existing biofilms. There is increasing evidence that biofilms play an imminent role in transmission of Campylobacter through the food chain. Studies indicate that Campylobacter can better survive atmospheric conditions in biofilms. Surfaces at the meat processing facility and at farms that are prone to biofilm formation include dressing, washing and packaging tables, facility floor, cutting utensils, plastic surfaces of the feeders and watering distribution systems; therefore acting as a source of Campylobacter contamination. Food processing facilities can have the perfect environment for Campylobacter biofilm formation because of organic material build up on surfaces. These organic layers are rich in nutrients containing carbohydrates, lipids and sugars, creating a good surface for bacterial attachment and survival. Studies have also shown that soiling of surfaces with chicken juice positively impacts Campylobacter biofilm formation. 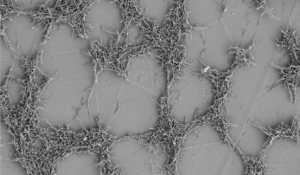