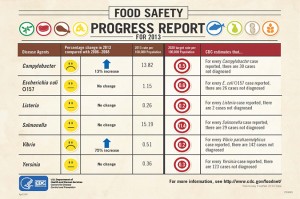 One of the things that this lab has done to identify risk-factors is to go onto turkey farms and take surveys of what the operations on that farm are like. For example, one of the things that farmers do to minimize the risk of spreading the bacteria to the birds is to give their boots a quick dip in a sanitizing solution before entering the turkey house. Ideally, this should be done before going into each house. Since Campylobacter resides in the birds’ intestines, the birds’ droppings also contain Campylobacter. And, since you cannot tell which birds carry it just by looking it would be impossible for the farmer to know if they have Campylobacter on the bottom of their shoes after being in a turkey house. Farmers may have several houses of birds. By dipping their boots between houses farmers can minimize the risk of spreading bacteria. So, one of the things we looked for was how often this sanitizing solution was being changed and if it was being used properly. These surveys are paired with samples of both feces and flies collected from the farms visited. The feces and flies collected from the farms were then tested for the presence of Campylobacter. Eventually, we hope to be able to make some conclusions about what actions on the farm have the greatest impact on reducing the population of Campylobacter.

Another aspect of the work our lab does is to monitor trends and changes in the Campylobacter isolates from conventional turkey farms. Each week, our lab receives samples from actual turkey farms. A piece of the intestine called the cecum is sent to our lab from a few birds in every flock being tested that week. The cecal contents are diluted in a special broth that helps Campylobacter to grow and inhibits the growth of the other bacteria living in the intestine. This broth is then spread onto agar plates and incubated at 42 C for 48 hours. These are exactly the conditions that help Campylobacter to grow. After the 48 hours of growing time, the number of bacterial colonies on each plate are counted and recorded and a number of the colonies are taken for further testing and to be frozen for storage. Doing this lets us see which turkey flocks were positive for Campylobacter. The colonies that were taken are then grown a little more  and tested with a process called the Polymerase Chain Reaction or PCR to determine which species of Campylobacter the birds were carrying. Campylobacter is a genus of bacteria and the PCR reaction lets us see if the species was coli or jejuni which would be written Campylobacter coli or Campylobacter jejuni. Those isolates are also tested against seven different antibiotics to see whether or not they are resistant.

In our quest to learn more about how Campylobacter gets into the birds in the first place (it is pretty well established that moms do not pass it on to their babies) we have recently begun a project where we are looking at Campylobacter isolated from flies and feces from the same farm visit. The Campylobacter isolates are tested against our panel of antibiotics to see if the isolates from the flies and feces are susceptible or resistant to the same antibiotics. The DNA from these isolates is extracted and then sent off for multi-locus sequence typing or MLST. This lets us know if two isolates are the same genetically. If a Campylobacter  isolate from a fecal source in flock “X” has the same antibiotic resistances as the fly isolates in flock “X” and they are the same genetic type, it is possible that the fly played some role in spreading that Campylobacter strain to that farm or throughout that flock.